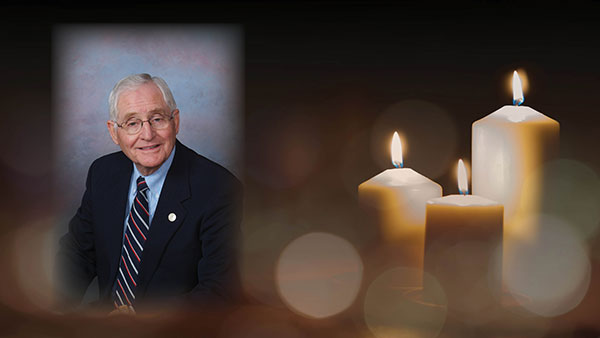 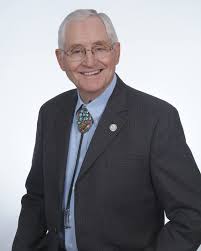 Services are scheduled for Dr. James C. Henderson at 11 a.m. on Friday, March 20. Please note, based on the Governor’s guidance of limiting group gatherings to no more than 10 people, the funeral will only be open to the immediate family. However, San Juan College will record the services, and a link will be provided on the San Juan College website shortly after the services. You can access the link at www.sanjuancollege.edu.

San Juan College and the community are mourning the passing of Dr. James Henderson, who served as President and Chancellor Emeritus at San Juan College for over 27 years.

Dr. Henderson guided the College to great growth and recognition during his tenure at San Juan College. Through his innovation, Dr. Henderson created the master plan for San Juan College that we enjoy today. His leadership earned the College the Zia Award in 2000, making San Juan College the first educational institution in the state to receive this prestigious honor. His legacy of excellence lives on through all of the beautiful facilities and programs throughout the College. The Henderson Fine Arts Center was named in his honor. Dr. Henderson and his wife Tycie attended First United Methodist Church, which is now Riverstone Methodist Church in Farmington where he served on numerous committees over the past 44 years.

In 2019, Dr. Pendergrass created the Henderson Teaching Excellence Award, in honor of Dr. Henderson, to recognize College faculty and their achievements and commitment to excellence in teaching, disciplinary expertise and service to San Juan College.

After serving in the United States Army, Dr. Henderson received his Bachelor of Science and Master of Arts degree from Northern Arizona University. He earned his Educational Specialist Degree and his doctorate from the University of Arizona. He began his academic career as a classroom teacher in Douglas, Arizona. He spent many years as the County and District Superintendent of Schools in both Bisbee and Willcox, Arizona. He moved to Farmington in 1975 to become the Chief Administrator of the San Juan Branch Community College, New Mexico State University. His visionary leadership set the stage for a successful county-wide election to create the independent community college, San Juan College. Dr. Henderson served as President of San Juan College from 1982 until 2002 and Chancellor Emeritus until his passing.

Dr. Henderson was a servant to his community and had a deep love, devotion, and dedication to San Juan College.  He served as a San Juan County Commissioner. He was a highly respected community leader, initiating countless partnerships in collaboration with entities throughout the Four Corners area. Some of these include the San Juan College Foundation; Leadership San Juan; San Juan Safe Communities; the Anasazi Foundation; the Anasazi Outdoor Theater; Quality Center for Business and Four Corners Economic Development. In addition, he was active in the New Mexico Amigos; Farmington Rotary Club; San Juan Regional Medical Foundation Board; First National Bank of Farmington Board of Directors; Four Corners Innovations; Farmington Chamber of Commerce and the Farmington Chamber Red Coats.

“Words can’t express the wonderful and amazing leadership Dr. Henderson provided to San Juan College and the community,” added Dr. Pendergrass. “He touched many lives, and through his passion, taught us the importance of learning and serving. He left a remarkable legacy and will be greatly missed.”

A funeral service will be held at 11 a.m. on Friday, March 20 at Riverstone Methodist Church, 808 North Monterey Avenue, in Farmington. There will be a visitation at the church at 10 a.m., Friday, March 20, prior to the funeral service. Due to heightened precautions now in place concerning the COVID-19 virus, the family will not be present at visitation and will not be interacting with guests at the church services. The family is sorry for the inconvenience but wants everyone to know they feel the love, support, thoughts and prayers. A private family burial will follow at Memory Gardens Cemetery, 6917 East Main Street in Farmington.

Dr. Henderson provided his visionary leadership to San Juan College for over 27 years – first serving as Chief Administrator of NMSU San Juan Branch Community College beginning in 1975, followed by his acceptance as president when San Juan College earned its independence in 1982. He served in that capacity until 2002.

Throughout his tenure at San Juan College, Dr. Henderson guided the college to great growth and recognition. His legendary leadership earned San Juan College the Zia Award in 2000, making San Juan College the first educational institution in the state to receive this prestigious honor. As a highly respected community leader, Dr. Henderson also served as a County Commissioner and initiated countless partnerships in collaboration with entities throughout the Four Corners area. He was recognized for his selfless service to his community by the Governor of New Mexico, as well as from numerous civic and local organizations.

Our thoughts, hearts and prayers are with his wife Tycie, and their family during this very difficult time. Funeral services are pending, and more information will be provided as it becomes available. In lieu of flowers, the family is asking that donations be made to the Alzheimer’s Association.

Editors note:  In addition to his many, many accomplishments, Dr. Henderson was instrumental in establishing San Juan College radio station KSJE as a "gift to the community" in 1990.  He supported the grant applications to help pay for the construction of KSJE and early programming.