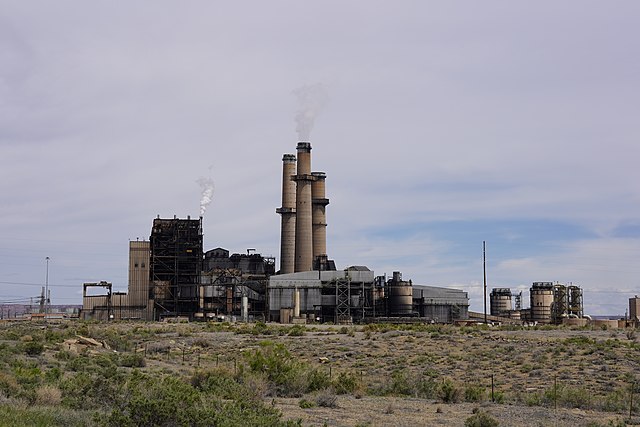 The New Mexico Public Regulation Commission was considering several replacement power options proposed by PNM to replace power lost by the closure of the San Juan Generating Station and San Juan Mine in 2022.

From the Sierra Club:

The combined projects would invest over $1 billion in the Central Consolidated School District and McKinley and Rio Arriba counties and create 1,200 multi-year construction jobs in the three counties. The decision also helps ensure that New Mexico will meet the goal set out in the state’s landmark clean energy law, the 2019 Energy Transition Act, which requires the state’s public utilities to produce energy from 100% carbon-free sources by 2045 and for all of the state’s utilities to achieve 100% clean energy by 2050.

Joseph Hernandez from the NAVA Education Project, based in Shiprock: “The PRC’s decision to invest in clean renewable energy here in the Four Corners, will transform our communities. It means new investments in our school district, hundreds of jobs for tribal families, and economic transition at a time when we need it more than ever. We applaud the PRC for following the Energy Transition Act and allowing us to help New Mexico lead in the clean energy economy.”

Mike Eisenfeld from San Juan Citizens Alliance, based in Farmington: “This is a historic decision for the Four Corners community to transition from reliance on fossil fuels. This decision also triggers much-needed Energy Transition Act funds to support the local community.”

Wendy Atcitty from Dine C.A.R.E, based in Farmington: "For decades, the Navajo Nation has been living in the shadow of San Juan Generating Station’s coal pollution sending energy to other communities. The PRC’s decision today truly begins a Just Transition – we can lead the transformation to clean, renewable energy, bring opportunities and new jobs to our communities, and improve the health of our People."

Sr. Joan Brown, osf, executive director, New Mexico Interfaith Power and Light: “Caring for our communities and our sacred land, water, air and future generations is our primary spiritual and ethical responsibility. The decision today for 100 percent solar and battery replacement that offers hope and a way into a new future to the San Juan region, which was the intent of the Energy Transition Act. Thank you for this leadership.”

Camilla Feibelman, director of the Sierra Club’s Rio Grande Chapter: “Today is a huge day for our renewable economic future. The PRC’s decision shows that New Mexico can transition from dirty coal-fired energy to clean renewable energy, while providing investment and jobs for the impacted communities. This is what the Energy Transition Act was intended to do: save rate payers money, transition to renewables, help workers and communities all while investing deeply in the impacted community.”

Sanders Moore, director of Policy Solutions Institute: "We applaud the PRC's decision, which will provide critical tax revenue and jobs for the Four Corners region, assisting families who worked in the coal industry. As the second sunniest state in the country, New Mexico is now poised to be a leader in solar energy jobs for working families here."

Kyle Tisdel, climate and energy program director at the Western Environmental Law Center: “With the retirement of San Juan Generating Station and the approval of 100% renewable replacement power, a new door is opening in San Juan County and in New Mexico. This is about our future, and the opportunities that exist if we can end the addiction to fossil fuels that have been undermining the health of our communities and the livability of our planet. This decision will diversify our economy and end the cycle of boom and bust for these coal-dependent communities. Outdoor recreation, mine reclamation, and solar are the future, and San Juan County can have it all.”

Pat O’Connell, Western Resource Advocates’ senior clean energy policy analyst: “New Mexico’s future is truly brighter today thanks to the Public Regulation commissioners, who took a historic step forward in our efforts to diversify our state’s economy by acting on climate. By choosing to replace the coal-fired power from the San Juan Generating Station with a strong suite of solar and battery storage projects, the Four Corners will see $1 billion of investment, gain 1,200 construction jobs, and lead our state’s efforts to realize the vision of the Energy Transition Act.”

John Ammondson, advocate with Environment New Mexico: "The Energy Transition Act laid out a path for New Mexico to move away from the dirty legacy of fossil-fuels and toward a 100% renewable future. The PRC's adoption of the recommended decision will make communities healthier while contributing to reduction of emissions that cause devastating climate change. Replacing coal with 100% solar and storage takes advantage of New Mexico's amazing renewable energy resources and invests in affected communities. We commend the commission for approving this measure and moving our state forward."

Alissa Barnes, executive director of ProgressNow New Mexico: “New Mexicans have made their voices heard. Renewable energy is the future of this state, and we are ready to lead the country in how we produce and consume energy. Today’s decision from the PRC reflects those values and highlights the power of ongoing commitment to a just transition that benefits tribal communities, workers, ratepayers, and the broader state community as one collective force.”

Demis Foster, executive director, Conservation Voters New Mexico: "Today is a historic day for New Mexico's economy, health and future. The unanimous decision by the Public Regulation Commission to approve the 100% renewable energy plan located in the Four Corners communities will provide the economic stability and clean energy investments that New Mexicans deserve. We applaud all five Commissioners for making this landmark decision, and solidifying our state's path into the clean energy economy."

Rikki Seguin, executive director, Interwest Energy Alliance: “Today New Mexico’s Public Regulation Commission sent a strong message: New Mexico is open for business. Their actions to support a 100% renewable energy portfolio will result in over $1 billion in investment from renewable energy developers who are eager to build projects and bring jobs and revenue to our state.”