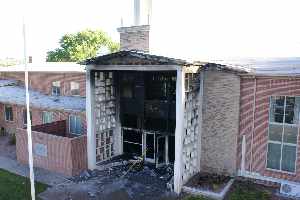 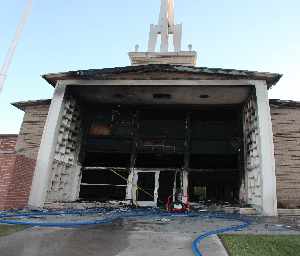 From the U.S Bureau of Alcohol, Tobacco, Firearms & Explosives:

The Bureau of Alcohol, Tobacco, Firearms and Explosives (ATF),  has announced a reward of up to $5,000 for information leading to the arrest and conviction of the person(s) responsible for a fire at the Church of Jesus Christ of Latter-day Saints in Farmington, New Mexico.

During the morning hours of June 1, 2019, unknown subject(s) arrived at the church located at 400 West Apache St. in Farmington, NM.  Shortly after, the alarm company for the church reported a fire. Local fire municipalities responded within several minutes and commenced suppression activities.  The investigation by the Farmington Fire Department in conjunction with the assistance of the San Juan County Fire Department and the Farmington Police Department has determined the fire was intentionally set, causing significant damage to the church. The investigation remains ongoing in an attempt to identify and arrest subject(s) responsible for the fire. 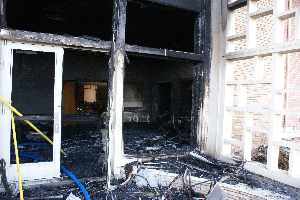 Anyone with information on the fire should call the San Juan County Crime stoppers at sjccrimestoppers.org or 505-334-8477, or call the ATF 24/7 toll-free hotline at 888-ATF-TIPS (1-888-283-8477), email ATFTips@atf.gov, or contact ATF through its website at www.atf.gov/contact/atftips.  Tips can also be submitted anonymously to ATF using the Report it app, available on both Google Play and the Apple App Store or by visiting www.reportit.com (link is external) using the Phoenix field division as the location.