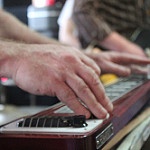 Dave Higgs, host of Bluegrass Breakdown, brings listeners an emotionally-charged, heart-rending, paint-peeling, splinter-kicking one hour bluegrass show. Thematically, Bluegrass Breakdown is all over the bluegrassical map. Based in Nashville, TN, the show features scintillating conversation and live music with some of the best in bluegrass. The goal of the show is to edify, educate, and entertain — leaving no instrument unpicked, no song unsung, and no musician uninterviewed.

Dave Higgs has hosted Bluegrass radio programs for the past 31 years, the last 16 of which he has been spent as producer of Bluegrass Breakdown for Nashville Public Radio, Nashville, Tennessee. The show is heard on approximately 30 public radio stations across the U.S. He was a staff writer for Bluegrass Now magazine where his column, “Band to Watch,” appeared monthly; plays the guitar, octave mandolin and banjola with Emily Singleton & Cumberland Plateau; and, in his spare time, is District Counsel for a governmental agency’s West Virginia and Pittsburgh District Offices.

Dave’s maternal grandfather (brother of Jimmy Martin’s mother, coincidentally) introduced Dave to the exuberance of Flatt & Scruggs and he’s been spellbound by the high lonesome sound ever since. While an undergraduate at Vanderbilt University, Dave started the first Bluegrass show on the campus station, WRVU-FM. While living in Colorado, Dave was at the helm of a Bluegrass radio program for 12 years heard over KCFR-FM in Denver. He’s been an active participant in the genre on numerous levels with a special passion to help deserving new bands.