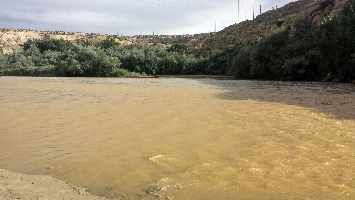 Confluence of the Animas and San Juan River near Farmington, NM during the Gold king Mine Spill in 2015.

Suit against U.S. Environmental Protection Agency (U.S. EPA) ongoing, will go to court in a year

From the NM Environment Department:

Today, the New Mexico Environment Department (NMED), New Mexico Attorney General’s Office, and the New Mexico Office of Natural Resources Trustee announce an $11 million settlement associated with the 2015 Gold King Mine blowout that released tons of toxic metals and acidic waste into the Animas and San Juan Rivers. The settlement is between the State of New Mexico and defendants Sunnyside Gold Corporation, which oversaw the construction of bulkheads that caused the Gold King Mine and nearby mines to fill with acidic mine water, and its parent companies Kinross Gold Corporation and Kinross Gold U.S.A., Inc. The $11 million paid to the State of New Mexico includes $10 million for environmental response costs and lost tax revenue, as well as $1 million to the Office of the Natural Resources Trustee for injuries to New Mexico’s natural resources.

“Thanks to unprecedented levels of collaboration between state, tribal and local governments, the Animas and San Juan rivers are healthy and clean again – supporting agricultural, recreational and cultural uses,” said Gov. Michelle Lujan Grisham. “But that does not change the fact that the Gold King Mine disaster harmed New Mexicans, harmed our environment, and continues to harm our economy. We have won this battle, but we will continue to fight as we hold the U.S. EPA responsible for this terrible incident.”

“I am clear about the Environment Department’s mission: those who contaminate our precious natural resources will face consequences,” said NMED Cabinet Secretary James Kenney. “If the U.S. EPA truly shares our mission of protecting and preserving the environment, they need to compensate the state for the damages caused to our environment, our economy and our people.”

"This settlement is a step toward holding accountable anyone who pollutes New Mexico. I am pleased to settle this portion of the case. It is now the U.S. EPA who must step up and take responsibility,” said Attorney General Hector Balderas. “I will continue to fight to protect our most vulnerable communities and pristine environment, especially from the federal government, which should be held responsible to these communities too.”

“The Gold King Mine blowout was a gut-wrenching reminder of how New Mexico residents suffer when toxic substances are released into the environment,” said Natural Resources Trustee Maggie Hart Stebbins. “Through this settlement, Governor Lujan Grisham and Attorney General Balderas are holding polluters accountable and making sure that New Mexicans along the Animas and San Juan rivers are compensated for their losses.”

As a result of the blowout, more than 3 million gallons of bright yellow mine water contaminated with heavy metals flowed into Cement Creek, a tributary of the Animas River. The toxic plume reached the Animas River and flowed into New Mexico and the San Juan River, which also runs through the Navajo Nation and Utah.

The spill led to costs incurred by the state, local municipalities and tribal nations to clean up the contamination. The spill also caused pollution to agricultural areas and adversely impacted New Mexicans in the agricultural and recreational tourism industries in the northwest corner of the state. Although extensive testing indicates that water used to irrigate crops in the Animas Valley is now safe and well within irrigation standards, farmers continue to see lower sales due the stigma left behind by the catastrophic release.

As a result, New Mexico sued the U.S. EPA, its contractors, and mining companies for damages sustained by the state. The lawsuit includes allegations of negligence, gross negligence, nuisance, and trespass, as well as violations of federal environmental laws. New Mexico seeks cost recovery, damages, injunctive relief, and attorneys’ fees. The case against the U.S. EPA and its contractors is still moving through federal court and is expected to go to trial in early 2022. The State of New Mexico intends to hold the U.S. EPA and its contractors fully accountable and to the maximum extent the law allows for the harm they caused to our environment and our economy.